Keeping cats out of gardens and yards

Peace with the neighbors is a sprinkler away

Not everyone wants cats playing in their yard or digging in their garden. Keeping the cats away from areas where they're not welcome is an important way to maintain good relations with the neighbors. In the end, the cats are going to be better off if everyone is happy than if there is constant conflict. A number of tools and techniques, listed below, can be used to keep cats out of gardens and yards. Keep in mind that TNR will make cats better neighbors, too. Neutering means dramatically less noise, no foul odors from unaltered males spraying, less roaming and so less visibility, and no kittens. 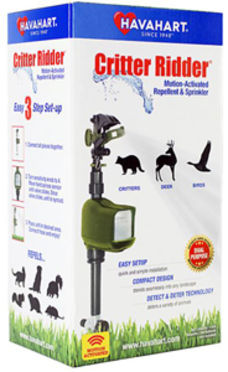 Our favorite deterrent! Using infra-red rays, the device detects when a cat (or similar sized animal) enters an area and then shoots out a sudden burst of water. The spray rarely hits the cat, but startles him and scares him away. Before long, cats in the neighborhood learn the boundaries of the infra-red field and are trained to stay out.

Motion activated sprinklers are connected to a hose. In cold climates, the device will not function in wintertime because the water will freeze. Put it out instead during the spring, summer or fall in time for the cats to be trained by winter. Common accessories needed are a hose, a Y connector (if you want to attach another hose to your spigot) and batteries. 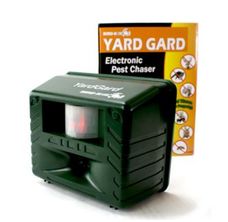 Similar to a motion activated sprinkler, an ultrasonic device covers the area to be protected with an infra-red field. When a cat is detected, the device emits a high frequency alarm that is imperceptible to people but highly startling and annoying to cats. Ultrasonic devices can be used in all types of weather, but if batteries are needed, they may need to be replaced more often in colder temperatures.

The effectiveness of ultrasonic deterrents is all about proper placement. Don't try to cover an area larger than the device is made for. If possible, place them near points of entry for the cats. Creative uses include keeping cats off your car by mounting the device above where you park (like on your garage) and pointing it down. Another idea is to use two devices to protect a property line by putting one at either end and facing them towards each other. Be sure the length of the property line is within the range of the devices.

Models include:
- Bird-X Yard Gard - it's bird friendly! Also comes in a discount solar powered version.
- PestAway Ultrasonic Animal Repeller by PredatorGuard. In addition to the ultrasonic alarm, the device has a flashing strobe light and optional audible alarm. 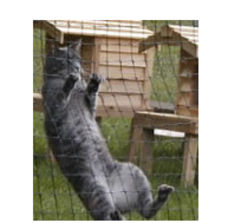 Fencing specially designed to contain cats within areas, like a yard, can also be used to keep cats out. Just point the slanted top of the fencing outwards instead of in. Cat-proof fencing is relatively expensive, but if you have the budget, it's highly effective. It can be purchased as a stand-alone fence or as an extension to the top of an existing fence. Manufacturers include Purrfect Fence (photo), EasyPetFence.com and ProtectaPet. 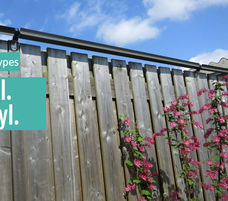 From Down Under:  Oscillot involves installation of roll bars, also called paddles, on top of existing fences. When a cat attempts to jump up and over the fence, he tries to grab hold of the roll bar. The bar spins upon contact and forces kitty to drop safely back down to the ground (scroll down the Oscillot home page to see video of the top five failed escape attempts!) Like cat-proof fencing, the product is marketed for keeping pet cats contained, but can also be used to keep free-roaming cats out. Designed and manufactured in Australia, Oscillot now has a USA-based distributor for North America. Also sold in Australia where international shipping is available. Note that this product may not function during winters in cold climates if the roll bars get wet and freeze. 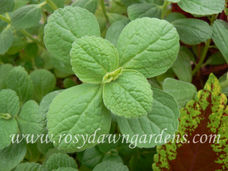 Scent repellants get mixed reviews, sometimes reportedly working well, other times not at all. Effectiveness is maximized by placing or spraying them around the edges of the area being protected, including on top of fences, and on any favorite digging spots or plants. They often need to be replenished after it rains, especially the spray varieties.

Natural (non-chemical) products include:
- Coleus Canina (photo) is a plant popularly known as the Scardy-Cat or Pee-off plant because it emits an odor offensive to cats but not people. Place them no more than three feet apart around the area you're trying to protect. Be aware there are many varieties of coleus plants, so be sure to order Coleus Canina. Available online from Rosy Dawn Gardens and other nurseries. Order early in the spring planting season before they sell out.
- Critter Ridder by Havahart is derived from hot peppers.
- The smell of many common household items sprinkled in dry form may protect gardens or flower beds. You can try orange and lemon peels (cats dislike citrus scents), the herb rue (which can also be planted live), cayenne pepper, coffee grounds, pipe tobacco and various oils, including lavender, lemon grass, citronella, peppermint, eucalyptus and mustard. 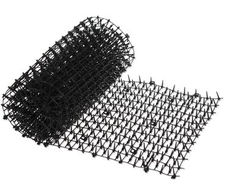 Cats love to dig, which is why they're attracted to gardens and flower beds. Physical deterrents to this behavior will help keep them away.

Barriers include:
- Cat Scat Mat (photo) from Gardener's Supply Company and other retailers. The 78 inch long mat has plastic spikes pointing upwards which discourage digging without harming the cat. It can be rolled out on the border of a garden or cut into pieces and placed in planters.
- Rough-surfaced rocks can be used to cover exposed ground.
- Prior to planting, lay lattice fencing on the ground and then place flowers and seeds in the openings. 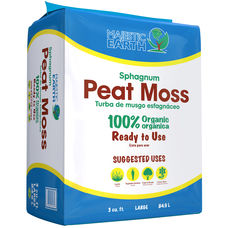 One way to stop cats from eliminating in one spot, like a flower garden, is to give them a more attractive place to go, preferably well off in a far corner of the yard. Inexpensive options include:

- A large pile of peat moss approximately 4 feet square and 8 inches deep.
- A sandbox, using regular "kiddie sandbox" sand.
- Fill a large storage bin with a few inches of kiddie sandbox sand. Cut a doorway 8 inches by 8 inches in the bin just above the level of the sand. For extra cleanliness, instead of sand, put a litterbox with regular litter inside the bin.

To attract the cats to their new bathroom, place a couple of pieces of the cats' poop in the new digs (while wearing gloves, of course!) To reduce odor, replace the peat moss, sand or litter regularly. Occasional scooping will also help. 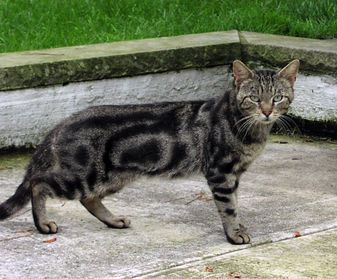 Whether you care about the cats and want to help them or wish they were never around, Trap-Neuter-Return is for you! TNR not only greatly reduces feline nuisance behaviors, it is the best way to lower the number of cats in your area over the long-term. Learn more.