Getting the Colony 100% Fixed

In almost every colony, there's at least one cat who is extra wily or timid and will not go into a regular box trap no matter how long you withhold food or how much you spend on roasted chicken, mackerel, sardines, rare roast beef, Wendy's burgers or solid white tuna. Before you give up and try to find a place to live where there are no feral cats (good luck with that!) try one of our hard-to-catch cat methods. Also check out our Trapper Tips.

A word of caution: don't use nets, net guns, graspers, dart guns or tranquilizers. These tools can be extremely dangerous for both the cat and the trapper and should only be used, if ever, by trained animal control professionals.

Most cats have a natural fear of entering a regular box trap, which is why you have to withhold food the day before and make sure they're very hungry before setting out to catch them. Even after a day without a meal, some may still not go in. For these holdouts, a drop trap is perfect. Cats are not afraid to go under a drop trap as opposed to into a box trap. As a result, a drop trap will do the trick for most hard-to-catch felines. Neighborhood Cats designed a collapsible, all-metal drop trap in partnership with Tomahawk Live Trap. See Drop Traps for more info, including how to use one. 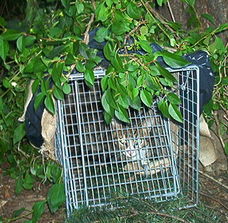 A feral cat will feel more comfortable entering a box trap when the trap appears to be a natural part of its surroundings. If you're working in a grassy or wooded area, camouflage the trap by first draping burlap on the trap's floor and over the top and sides. Leave the front and rear doors uncovered so the cat can go in unobstructed and have a clear view out the rear. Place leaves, sticks and other loose natural matter on the burlap. If possible, position the trap near a bush or under a tree to make it appear even more like it's part of the environment. Similar techniques can be applied in other settings as well. In a more urban or industrial setting, put the trap inside a long cardboard box, leaving the front and rear doors uncovered. Then sprinkle debris and material from the immediate surrounding area on the box. Or lean a board against a wall or fence and place the trap under it. The more the trap blends in, the more likely the cat will enter.

Train the Cat to Enter a Trap 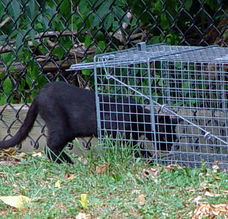 If a trap can be safely left outdoors in the cat's territory for an extended period of time, it's possible to train her to go in. The area needs to be secure so no one walks off with the equipment, like a secluded backyard or a private courtyard. You can also train an entire colony with this method, using one trap per cat. The process usually takes from one to two weeks. For each trap deployed, follow these instructions:

If you must use this method somewhere that is not totally secure, remove the rear door of the trap and take it away with you. This will render the trap useless to anyone with ill intent. You won't be able to train the cat to go all the way to the back end of the trap, but you can train her to eat in the middle, which should be good enough. Try to place the trap somewhere hidden and use a chain and lock to secure it to an immovable object like a pole or fence. If the area is too accessible to the public and the risk of vandalism or theft is high, don't use this method. 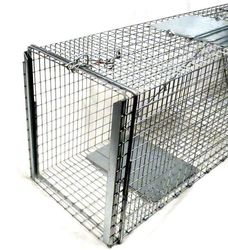 A trap-shy cat will be less fearful of entering the narrow confines of a box trap if she believes there is a way out on the other end. One way to create the illusion of a back exit is with a transparent rear door, like the one designed by Neighborhood Cats and Tomahawk Live Trap. It fits Tomahawk traps measuring 10 inches wide by 12 inches high and replaces the normal wire mesh rear door. Go to Tomahawk or call 1-800-272-8727 to order Model NC1012. If you're using another kind of trap, ask your local hardware store or lumberyard to cut a piece of thick Plexiglass the correct size. Have them drill a hole centered near the top and then secure your see-through door to the trap with a cable tie or strong twist tie. After you've caught your elusive cat, section her off towards the front of the trap with a trap divider, then replace your see-through door with the normal one. 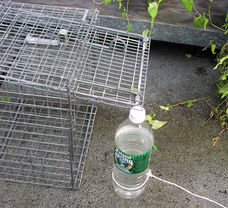 Cats are smart! Some know not to step on the trip plate. Instead they'll step over or around it to reach the bait. One way to outsmart them is to bypass the whole trip plate mechanism and use a bottle and string to manually close the front door. Open the front door and prop a corner on a full one-liter water bottle. Tie one end of a long piece of string around the bottle's base, then move away from the trap, holding onto the other end of the string. Wait for the cat to go all the way in, then yank the string, pulling the bottle away and shutting the front door. Before you try this live, practice yanking the bottle away once or twice so you have the feel for it.

Whenever you see a cat in a trap who avoided the trip plate and is happily munching away on the bait, you want to get him out of the trap so you can set up the bottle and string. But don't overly frighten him by making loud noises or rushing up to the trap or else he won't come back for seconds any time soon. Walk up slowly and quietly, giving him plenty of time to see you and back out of the trap. Sometimes the cat will step on the trip plate as he's exiting. If not, often he'll wait around for you to set up the bottle and string, then go back into the trap when you're a safe distance away.

The bottle-and-string technique can also be used to pick out a specific cat from the crowd, like one who is pregnant or injured. If you're trying to selectively trap, put a lot of bait in the rear of the trap. That way, a number of cats can go in, have a bite and leave while you wait for your target cat to do the same. 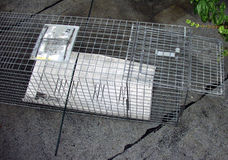 Besides the bottle-and-string, another way to catch a cat who knows to avoid the trip plate is to hide the plate under a sheet of newspaper. Cover,the plate, the floor in front of it and the floor a little bit behind it. If there's any wind at all, use clothespins to secure the paper in place and keep it from flapping around and scaring the cat. To make it even harder for the cat to avoid the trip plate, slide a stick through both sides of the trap a few inches off the ground andjust in front of the plate (see photo). The stick will force the cat to step over the stick with his paw landing on the hidden trip plate.

Lure into a Closed Space 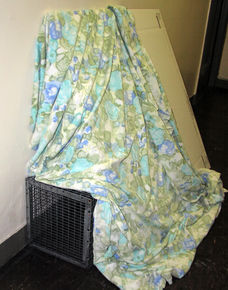 If you can lure a cat into an enclosed space like a basement, garage or shed and close the door behind her, you're well on your way towards getting her into a trap. Once the cat is inside, you can try the patient approach, which involves simply setting a baited trap in the space, or the quick approach of running her into a trap. Be sure to check ahead of time that there are no cracked open windows, holes in the wall or other possible escape routes.

If you want to try to wait it out after the cat is inside, place a baited trap in the space, figuring sooner or later she'll get hungry enough to go in. Replenish the bait at least twice a day and leave water available outside the trap at all times. Also leave out a full litter box and a pile of newspaper (in case she doesn't know what litter is). To avoid harming the cat by depriving her of food for too long, don't try this for more than two or three days and don't withhold food for more than a few hours with kittens or cats with special needs.

The faster way to trap her is lean a large board against a wall and hide a set trap behind it. Drape a sheet over the board to block the open space above and to the side of the trap, but don't cover the trap door (see photo). Do this with both the back and front ends. Before you lure the cat into the space, remove or block off any other possible hiding places. The idea is that the cat, upon realizing she's stuck in the room, will frantically look for a place to hide. Because she won't see anywhere else, she'll run behind the board and into the trap.

If the cat does find an unexpected place to hide, gently flush her out with a broomstick or similar long object and force her to go find another spot. If for some reason she won't go behind the board or into the trap, set a baited trap in the space, leave out water and newspaper/litter and try again later, after she's had a chance to calm down. 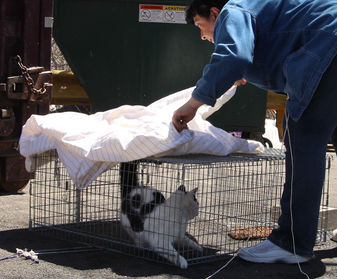 How to Use a Drop Trap

Read our complete instructions for using the Neighborhood Cats Drop Trap, including assembly, positioning, bait, dropping the trap and transferring a cat out after capture.