Why testing is not standard for feral cats

Like the great majority of TNR programs, Neighborhood Cats does not test every cat trapped for FIV (feline immunodeficiency virus) or FeLV (feline leukemia). Testing is performed only when a cat is a candidate for adoption or is ill and the veterinarian believes the results would assist in diagnosis and treatment. Otherwise, the cats are returned to their outdoor homes without testing being done. There are a number of reasons for this policy which are discussed below.  Also read about the latest research showing FIV positive cats can safely live with negatives, and that FIV positive moms don't pass the virus onto their kittens. 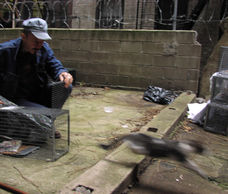 1.  Limited resources
Every dollar spent on testing is one not spent on spay/neuter. The mission of a typical TNR program is to stabilize then reduce the free-roaming cat population, not stop the spread of feline diseases. Research has shown the infection rate for FIV and FeLV in community cats is similar to that in pet cats - approximately 8% for both viruses combined (Lee et. al., Prevalence of feline leukemia virus infection and serum antibodies against feline immunodeficiency virus in unowned free-roaming cats (2002) Journal of the American Veterinary Medical Association, Vol. 220: 620-622.) Using this figure and assuming a cost of $15 for an FIV/FeLV snap test, testing 100 feral cats would cost $1,500 and identify an average of 8 cats as presumptively positive for one of the viruses. If the cost of a spay/neuter surgery is $50,  identifying those 8 cats through testing would mean 30 cats would not get altered.

2.  The tests normally used are unreliable
The test normally used on community cats, when it is performed, is the ELISA (Enzyme-Linked Immunosorbent Assay) test. It is commonly called a "snap" test because it can be done quickly in the clinic. Snap tests have high rates of error, especially in regard to false positives, and are not intended for final diagnoses (see The Merck Veterinary Manual (2012)). Instead, for a conclusive result, the cat's blood must be re-tested in a laboratory using more rigorous techniques. Given financial and time restraints, follow-up testing is rarely done with ferals. As a result, a program that snap tests all cats and euthanizes any positives is probably putting down some perfectly healthy, virus-free cats.

3.  Spay/neuter can stop the spread of disease
The thought behind universal testing is that the spread of FIV and FeLV can be slowed by identifying positive cats and removing them from the outdoor population.  However, spay/neuter can also stop the spread of the viruses and may, by attacking the modes of transmission, be a more efficient approach. FIV is transmitted primarily by deep bite wounds - this kind of injury is most associated with the mating behavior of unaltered male cats, including fighting. Once a male is neutered, this degree of aggressive behavior is much less likely to occur. As mentioned at the top, a recent study found it is safe for neutered FIV positive cats to live with FIV negatives. With FeLV, infection in our experience is most common in kittens whose immune systems are not yet fully developed. Stopping reproduction prevents there being kittens in the first place.

4.  Testing and euthanizing risks alienating caretakers
In most cases, when testing is universal, the outcome for cats who test positive is euthanasia even if they are asymptomatic. Caretakers are rarely given the option of having the cat altered and returned. Putting down a cat without the caretaker's consent can have negative consequences. The caretaker may feel her otherwise healthy-appearing cat was wrongly put to death and the TNR program usurped her right to decide what was best. This could deter her - and other caretakers who learn what happened - from participating in the future and potentially risking the lives of their cats.

5.  Disease is a function of the quality of caretaking
In Neighborhood Cats' experience, colonies where FIV and FeLV are prevalent tend to be poorly managed in some respect. The cats may not be fixed or available food and shelter may not be adequate. Getting more cats spayed and neutered and improving the quality of care through training and support are more effective at achieving healthy community cat populations than testing and culling.

6.  The lives of positive cats have value, too
At Neighborhood Cats, we believe euthanasia should only be an option to end suffering from severe illness or injury that is terminal or, for lack of resources, cannot be treated. We don't believe ending a life is justified by the possibility of future illness or the chance another cat may catch the virus. With FIV, altered cats can live normal lives for many years and, absent extremely aggressive behavior, won't transmit the virus to other felines. While FeLV is reputed to be much more contagious, we have had cats who unknowingly were positive and mingled with other adult cats for years without transmission. Most cats who catch FeLV when they are young do not live beyond the age of three years, but during that time can have full and otherwise healthy lives.  So for us, one more reason not to test a feral cat who shows no sign of illness is we would return him to his colony, anyway, regardless of the test result.

7.  The "guilt trip" isn't true
Among the small minority of TNR programs which still test every cat, the main argument advanced is that, by returning a cat who is FIV or FeLV positive, you are responsible for the deaths of any other cats who catch the diseases from him or her. We don't agree, even if a positive cat should end up transmitting the virus to another. Practicing TNR does not mean creating a world without risk for community cats - it's about making the situation better, not perfect. The viruses were in the environment before you, the caretaker, came along and will continue to be there. By getting the cats fixed and providing for their care, you are vastly improving their lives. No one has cause to criticize you for deciding to allow a cat, positive or not, to return to his family and home instead of euthanizing him.