Catch all the cats!

Whether you're dealing with two cats or twenty, the goal is to get 100 percent of the colony spayed and neutered. Catching and fixing all the cats at the same time ("mass trapping") is the fastest way to accomplish this, but if you need to, you can move at a slower pace using similar techniques. The basics of mass trapping are described on this page. To learn more, watch our video just below on How to Perform a Mass Trapping. You can also review Chapter 9 (Trapping) in the Neighborhood Cats TNR Handbook.

Quickly get the colony under control - In a matter of days, what may have been a bad situation with upset neighbors is dramatically improved. Yowling, foul odors, mating and fighting activity - all are eliminated or greatly reduced practically overnight. Plus no more kittens!

Less time and effort overall - Mass trapping is more efficient than a one-at-a-time approach. Securing traps, finding a holding space, arranging transportation and making spay/neuter appointments only need to be done once instead of repeatedly over a period of weeks or months.

It's easier to catch all the cats - Trapping one cat at a time is relatively easy in the beginning when all the colony cats are candidates for capture, but when you get down to the last ones, you have to pick them out from the crowd which can be tricky. With mass trapping, the last cats are the only ones out in the territory and with each day of the trapping, they're getting hungrier and more likely to go in.

The logistics - Well before the trapping begins, a number of pieces must be in place. You need to find a holding space that is warm, dry, secure and large enough to house the number of cats you plan to trap. Spay/neuter appointments must be scheduled, traps borrowed or purchased and transportation arranged. Identifying emergency veterinary care, in case it's needed post-surgery, is also highly recommended. These preparations are discussed in more depth in The 7 Steps of TNR.

Establish a feeding pattern - Feral cats are much easier to trap when they've been trained to eat in a predictable pattern. If you know where and when the cats show up, then you also know the best time and place to set out your traps. To train them, put out their meals in the same location at as consistent a time as you can manage. Try to pick at time that will work best for the trapping, such as late morning as opposed to 2 am. The cats will quickly learn to be there, waiting for you. For more on feeding patterns, also see The 7 Steps of TNR.

Withhold food - Feral cats are naturally wary of entering the narrow confines of a box trap. Before most will go in, they need to be hungry enough to overcome their fear. It is critical to withhold food the day before the trapping so that they'll be very hungry the next day. Check the site periodically to make sure no one stops by and leaves out a bowl of kibble. Continue to provide fresh water daily.

Leave enough time - Always plan on at least two days to trap an entire colony, three days if you're after ten or more cats. When mass trappings fail to get all or almost all of the colony, it's often because the trapper only allowed for one day and something went wrong, like bad weather, unexpected foot traffic, loud construction noise or a similar disruption.

Prepare the traps - Line up the traps in a row a comfortable distance from the colony's feeding area, rear doors facing the same direction. If possible, do this out of sight of the cats. Do a quick check to make sure the traps are all in working order, then tuck a folded sheet between the handles of each trap. If you have a trap with a narrow trip plate, tape a piece of cardboard onto the plate to extend it. Finally, lift the rear doors, place bait inside and then close and lock the rear doors. Use a smelly bait like tuna or mackerel.

Place the traps in the territory - Put all the traps out in the territory at the same time. You should have one or two more traps than there are cats, so it's easier to catch the last few. Position the traps around the feeding area, along pathways normally traveled by the cats and in other nearby areas where the cats are known to gather. Don't leave a trap sitting out in the open, but lean it up against something, like a wall, fence or curb. Make sure they're resting on level ground and no objects will block the front doors from closing. Once a trap is in place, make a trail leading to the front door from a few feet away by crumbling a cat treat or dripping the juice from canned fish.

Action! - Remain in the area and never leave the traps unattended, but don't watch too intensely. The cats will sense your anxiety and it may cause them to hesitate to enter a trap. Adopt a casual attitude like nothing unusual is going on. Don't go in and out of the territory, adjusting the traps, but wait and let the cats check out the traps and discover the bait. Remember, if they're hungry, they'll be interested.

When you catch one - When the front door shuts behind them, most cats will panic and try frantically to get out of the trap. Quickly cover the trap completely with a sheet, which should calm the cat down. In the rare event covering the trap does not calm the cat, insert a trap divider from above and limit the amount of space the cat has to move about in. Never release a cat because you're afraid she'll injure herself.

Hot spots - After a cat is caught, remove the trap (with the cat inside) to a safe location. Place a new trap at the same spot where the prior one had been placed. Often there are "hot spots" where cats are more attracted to going in.

Continue trapping - As long as you're seeing cats interested in the bait, stick around and leave the traps out. To hasten their capture, consider breaking out a drop trap if you have one with you. After there are no more candidates around, pack it up and come back the next day for whoever remains.  Keep trapping each day of the project, continuing to withhold food (but be sure to leave water outside the traps). Don't stop until either everyone is caught or the rest of the cats have been fixed and released back outside. If you missed anyone by the time the colony is returned, give it a rest until the cats have resumed their normal routine. Then try one of our methods for hard-to-catch cats.

Once a cat is caught, his trap will double as a cage while he awaits surgery and during his recovery afterwards. That's why it's important to have a pair of trap dividers and use traps that are 30 to 36 inches in length and at least 10 inches wide. See Traps & Equipment for the models we recommend. Techniques for feeding and cleaning when a cat is held in a trap are described and demonstrated, including a short video, in Caring for Cats in Traps.

Using traps as cages may feel uncomfortable at first to a novice trapper, but feral cats actually prefer tight, dark spaces when confined, not large open ones. Keep the traps covered with sheets and feed and clean twice a day and the cats will be fine. The alternative of putting each cat in a cage is more expensive in terms of equipment needed, requires a much larger holding space and carries an increased risk of escape and injury to the cat and the trapper.

After their surgeries, the cats should be held for at least 24 hours and, if there are no complications, no more than 72 hours. Releasing immediately after the surgeries may be expedient for the trapper, but subjects the cats to great risk. There is no opportunity to assess if there are any post-surgical complications and no recuperation time after the cat has undergone anesthesia and a major procedure. On the other extreme, holding a feral cat too long could increase her stress level to the point of causing illness.

With females, check the site of their spay incision prior to release. Remove any newspaper from the floor of the trap and have a helper lift the trap up in the air. Using a flashlight if necessary, take a close a look from underneath at the incision. If there is any excessive bleeding or inflammation (redness), don't release her and bring her to a veterinarian to be checked.

Always return the cats back to their colony site and never release them at a new, unknown location. Some of the cats may disappear for a few days after release, but will return. 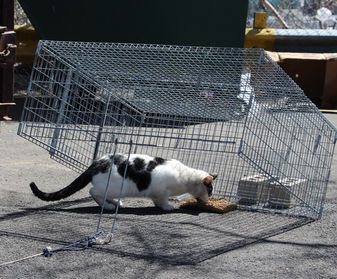 Got a cat or two that just won't go in a normal box trap? Check out Drop Traps and see why this piece of equipment is known as a trapper's best friend.