Relocating feral cats can be a difficult process and should only be attempted after every effort has been made to maintain the cats safely in their original territory. If a relocation is performed, it needs to be done carefully, following the steps described here and including a confinement period in the new territory of three to four weeks. For more info, read Chapter 15 (Relocation & Sanctuaries) in our Neighborhood Cats TNR Handbook.

Should the cats be relocated? 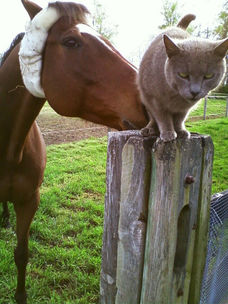 When a feral cat colony is out-of-control with unaltered cats and undisciplined feeders, local residents will often feel and express hostility towards the cats and anyone seen as helping sustain their presence. Someone who cares about the cats but is unfamiliar with TNR may believe at first that relocation is the only way to ensure the cats' safety and should be done as soon as possible. Usually, this is a mistake.

Feral cats are very tied to their territory, especially if they were born there. They know every nook and cranny and this knowledge can be key to their survival outdoors. Contrary to the myth of the cat as a solitary creature, ferals are also highly social and form strong bonds within their colony. When a cat's ties to his territory and colonymates are broken, there is always a chance he will leave his new location in search of his old one, even if all recommended steps are followed. It's possible too, that when cats are removed from an area, a vacuum will be created that new cats will move into soon after the original ones are gone. For these reasons, relocating the cats to a new site should only be considered as a last resort. Often, the TNR of the cats will resolve most issues quickly, including noise, odor and too many kittens. More controlled feeding and better oversight can also help turn a situation around.

Circumstances that would justify a relocation include the demolition of the colony site and no way to shift the cats over to a safer adjacent spot by gradually moving their feeding station. A caretaker who is moving and cannot find a replacement feeder in the neighborhood is another time when relocation may be needed. The threat of harm to the cats may also be too high on rare occasions to allow a return to their territory.

How to do a relocation 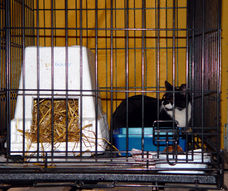 Step one: find a suitable new site
A new location will need to have (1) a reliable caretaker willing to take on the responsiblity of managing the cats on a long-term basis, (2) a structure of some kind where the cats can be confined in the new territory such as a garage, barn or shed, and (3) distance from heavy traffic or construction. The site should be personally inspected before a decision to relocate is made - don't rely on photos or a verbal description. It's important for the cats' safety.

Step two: set up the confinement area
Because they are so territorial, feral cats must be trained that their food source has changed. Three weeks is the recommended amount of time for this process. During this period, they must be confined in the new territory, whether it's an enclosure in a barn, cages in a garage or the like. If not confined, they are likely to run away, looking for their former food source. Before trapping and transporting the cats, set up the confinement area and have everything ready to go. Choose a quiet spot and create nearby hiding places where the cats can go after being released, like bales of hay or cardboard boxes. It's best to do the relocation in warmer temperatures and use the Feral Cat Setup if the cats will be held in cages. If the relocation must be done in colder weather, be sure the cats have adequate winter shelter. Styrofoam coolers stuffed with straw can be used as shelters in cages (see photo).

Step three: trap, vet and transport
Whenever possible, trap and relocate the entire colony at the same time. If the colony must be broken up among multiple new locations, keep them at least in pairs with known buddies matched together. Have any necessary veterinary work done, like spay/neuter, vaccinations or flea treatment, before transporting to their new location. Once they've arrived, be sure to train the new caretaker how to feed the confined cats and clean the litter boxes, being aware some may try to escape at first.

Step four: confinement
Three to four weeks is optimal for the confinement period. Don't confine for longer than that or the stress may cause the cats to run off after being released. Encourage the new caretaker to talk to the cats and spend time with them, so they bond with their new person. Feed tasty wet food and stick to a regular feeding schedule so the cats learn to enjoy their new routine. After release, leave the cages or enclosure in place (with doors now open) for a couple of weeks or more so the cats have a familiar place to go if they want. Be sure to stay in touch with the new caretaker and be available for any questions and, if possible, have a backup plan just in case it doesn't work out.

Step five: remove food and shelter from the old territory
To prevent the vacuum effect of new cats moving into the now vacant old territory, remove any shelters and especially all food sources. Even if demolition or something similar is imminent, scrub the territory clean so it's inhospitable for felines. You don't want to have to deal with another relocation!